Describe your contributions to and achievements in family planning.

As a young researcher & activist I founded a Youth Organization Y Coalition. With ‘Life beyond the border project” We empowered Youth adolescents Rohingya Refugees to break the social taboo & Create Awareness on Menstrual hygiene, early forced marriage & Sex Education that involve 376 Youths, 312 Women & girls, 40 Imam from the 10 Communities in Camps. For contribution to the Community, The project received Commonwealth Peace Award 2019 among 54 Nations.

What sparked your passion for family planning?

I was born & raised in a village where Rohingya refugee living since 1996 & since then we hosted 1.2 million Rohingyas who outnumbered local population. Victimization of such a humanitarian crisis spark my passion to initiates ‘Life Beyond the Border”. I have spent all my life in Refugee camp, and I have witnessed women and girls suffering unbearable pains of gynecological complexities and Menstrual unhygienic and immature pregnancies. With the project, we work with 2000 adolescents’ refugees.

Give one or two examples of how you display leadership in your family planning work.:

We engage adolescent and adult refugees, aged 10 to 35 and train them to make ‘Public Opponents’.The Popular Opponents (POs) are refugees who stand up to early marriage in the camps. POs are divided into four categories. So far,Life Beyond The Border has trained 132 POs as Community Reporters, 149 as Young Advocates,63 as Peer Educators and 1100 as Campaigners,who reported 23 child marriages, stopped 27 child marriages and educated refugees to access family planning services from 30 clinics.

Photos of the nominee in the field/at work: 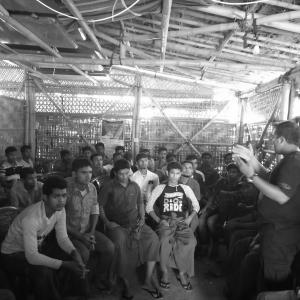